How to Give a Shark a Physical 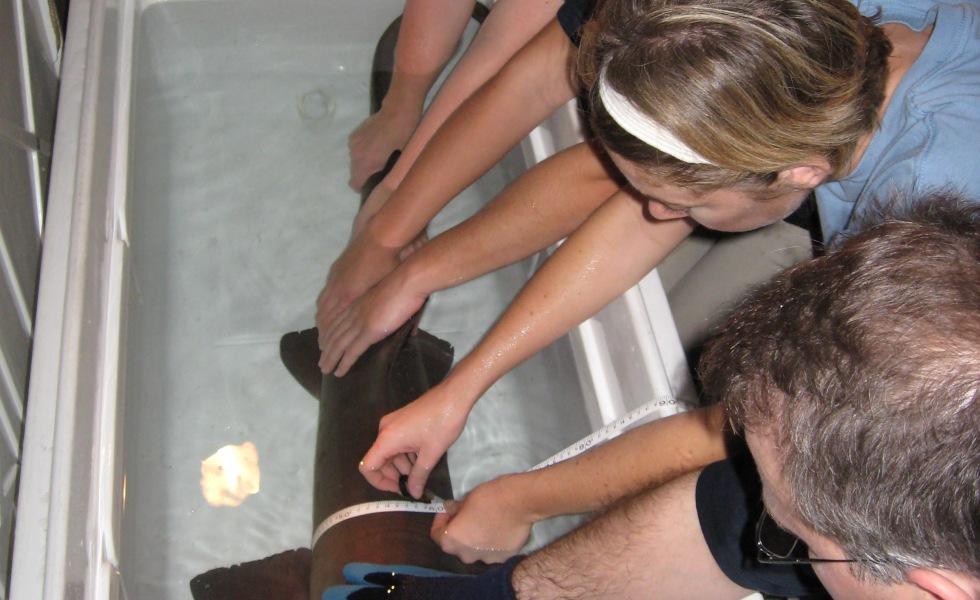 One of my favorite days when I was an aquarist volunteer was Shark Physicals Day. It was only offered to select individuals and I had finally made the cut. You got to the aquarium in the pre-dawn hours and had to catch 4 sand tiger sharks and 3 nurse sharks out of a giant tank and give them physical exams. So much fun! *Note: this is how it was done “back in the day.” These procedures and images are from 2007, so I have no idea if the procedure has been updated. I sure hope they have a new radiograph machine. The old one already had the moniker of “the dinosaur.”* **No sharks were injured or harmed during these procedures.**

The most important thing to plan for shark physicals: teamwork! Each of the 7 sharks was given a specific “team,” from a head, body and tail holder, to note taker, timer and aeration, plus the vet team taking their samples. To teach everyone the same skills, jobs were rotated between animals. My first round of physicals I was note taker and aeration. The second time, I got to pole and help with radiographs.

So, the question I hear everyone asking is, “how do you do this without risking physical injury?” Well, the nurse sharks were the easiest, since they don’t have true “teeth,” just bony grinding plates, like a stingray. Basically, we scooped them up in a big net, scooted a stretcher under them and moved them to a holding tub (ironically called a “coffin cooler”). Morphometric measurements were taken (length, width, girth, etc) with a blood sample.

Now, the sand tiger sharks came in two sizes, small and large. The small guys were about the same size as the nurse sharks, so they same tactic was used. Big net and into the coffin cooler, with one main change…

Yes, sand tiger sharks have sharp pointy teeth and rows to spare! Hence the addition of bite-proof gloves. Thankfully, we did not have to test them out. The sharks were kept calm by increased levels of oxygen and a small amount of pressure applied to their rostrum. The little guys were easy enough, but the big sand tigers were 6′ and up.

So, for these lovely creatures, we used “the tube.” A wonderfully manufactured device that consisted of a clear, plexiglass tube that the shark would swim in one way and be trapped. Once the shark was in the tube, it was easy to perform a full exam. The hard part was convincing the shark into the tube. This is where the “polers” came into play. Two people with spotters would use large pool hooks to guide the shark into the tube. Usually, a fairly short operation, but sometimes the sharks simply were too smart for us and it would take a few attempts to guide them into the tube successfully.

Once in the tube, oxygen was introduced through the closed front end. This job was fun because you had to watch out of the other sharks in the tank coming by to check out your free arm. Measurements were taken by pulling the shark out part way and sticking him back in. Upside down sharks experience tonic immobility, which essentially zonks them out and keeps them calm. The worst part about this, was if you were on the tube or air, you were laying down on concrete for awhile. It hurts!

Once the measurements were taken and the blood was drawn, it was time for radiographs. Since the dinosaur would not fit inside, we had to bring the shark up and out to it. A stretcher was placed under the tube, the tube pulled out as awkwardly as you’d expect and then the big strong guys, plus me, had to cart the shark to the dinosaur. Shark goes onto tablet, open stretcher to pop a picture and then back into the tank. Repeat until images satisfy the vet team (usually on the first go).

These radiographs were important to watch the curvature and vertebrae of the sharks. Many sharks in aquariums get spinal curvatures, and we’re not sure why. Hopefully, this is a thing of the past since I’ve worked in an aquarium.

And that’s how you give a shark a physical exam! Like I said, this is from over 10 years ago, but it was one of my most cherished memories of working at Mystic Aquarium. I miss all of these wonderful people terribly and can’t thank them enough for shaping my career today!

This site uses Akismet to reduce spam. Learn how your comment data is processed.