The End of Outrigger Season

Saturday marked the end of my first outrigger canoe racing season out here in California. Since March, I have been practicing 3 times a week with 5 races throughout. My first race of the season was just a short 4 mile course down in Monterey. My final race was 25 miles from Santa Cruz to the very same beach in Monterey. It has been a great season and I got to incorporate a lot of great people into my life!

Since rowing crew in high school for one season, I haven’t had much exposure to water sports. My boyfriend, who rowed crew in college, wanted to give outrigger canoe a try last October, when Outrigger Santa Cruz was offering a beginners class with their recreational crew. I was hesitant at first, but finally gave in. I had been wanting to try out a new water sport since moving to Santa Cruz, but couldn’t pick one out of the vast array of possibilities. Our first class consisted of us sitting in chairs with paddles swinging through the air. I remember sitting there, thinking, “what am I doing?” Once we got in the water, things started to make sense. Several weeks later, the class was over and we both decided to sign up for the upcoming racing teams that season. Bring it on!

It was a lot of long hours and early mornings, especially those 7am practices some weekends when the men’s and women’s teams had to split time on the water. I had practice Mondays, Wednesdays and Saturdays to my other half’s Tuesday, Thursdays and Saturdays. One of us always had practice and hopefully the other would make or fetch dinner. Sometimes, the race day starts were even earlier. Since I am the morning person, I would be up making breakfast at 4:30 or 5am before a race, then pry him out of bed and into the car. Race days were long and tiring. Show up hours before starting, rig the boats, eat and drink, paddle, paddle, paddle, pull the boat out of the water, eat and drink, unrig the boat, load the boat, drive home, eat and drink, and finally, sleep for 10-12 hours. The next day, like yesterday, is spent trying to get back to normal while saying “ow” every time you try to move. Paddling is the reason why my work office is closed Saturdays. I tried to do surgery after practice one Saturday morning. Big mistake.

My first ever race was in Monterey around Memorial Day last May. We had a little short course and came in first place in our division. In fact, our whole team placed first in their divisions. What a great way to start out a season. Our next race, out and around Angel Island in San Francisco bay, I got moved up from the short course boat (6 miles) to the long course boat (10 miles). Our boat did not place this time, but a lot of our teammates did. This venue had a great vantage point on the cliffs overlooking the bay, so it was fun to watch the other crews come in. I remember heading back to my aunt and uncle’s house north of the venue and trying to be polite to the guests they had over, which when you are tired and sore from paddling straight for around 2 hours, is not easy.

For a change of pace, we had a sprint competition late June in Alameda. Instead of long distance paddling, the top length was 1000m. Basically, the course was 250m and you had to turn your boat 180 degrees several times. How easy do you think it is to turn a 30′ canoe that is at full speed? It can be done, but you gotta know what you’re doing. There were 80 different events that day. I was in two crews: one novice and one coed. We made the finals in both events, but didn’t finish on the podium. Oh, well. It was a fun change from the traditional long distance events.

Then came the Alcatraz race. Another longer one, 12 miles I think, around Alcatraz Island in San Francisco Bay then under the Golden Gate Bridge and back to Chrissy Field. Paddle around the island? Sure, no problem. I was told conditions were ideal, but since it was my first race, I have no way of comparing it to years past. Everything in my head was going awesome up until the bridge. The water under the bridge was CRAZY! I think we paddled for 20 minutes and barely moved. We had a buoy to round and it kept popping up all over the place. Thankfully, we had a spray skirt wrapped around the boat to keep the water out. Another crew that day was not so fortunate, the boat swamped and the crew had to be rescued by the Coast Guard. From the adrenaline in those crazy waves, the mad dash to the finish line was a blur. Before I knew it, our steersman told us to stop and all I was thinking was, “we can’t be done already?!” We came in 2nd in our division, which was the 40 and under since I was in the boat. The crew I paddled with was our Master Women’s crew (40-50 yrs old) that was training for the 41-mile course in Hawaii. Just having me in the boat dropped them a whole division. Our team currently only has 3 women in the open division (under 40) and we are looking to add some more ASAP.

I missed one of our home town races due to a quick trip back east. So my next race was the National Championship, racing from Newport Beach to Catalina Island. 26 miles of open water. Since the water down there is nice and warm, our change crew needed to perfect our water changes. What are water changes? Basically, in order to swap people out of our boat (only 6 spots in the boat and 9 paddlers), 3 people would jump out one side of the boat while 3 people climbed in from the other side. With my long legs and extra pull up practice, it wasn’t hard to get the hang of it. We had borrowed a fancy lightweight canoe for this event and it made a difference. Our green sea cucumber sailed through the water and into Catalina in 4th place. We had been battling with a Santa Barbara boat for the last half of the race and were hell bent on beating them. We had our strongest crew set in the boat and could almost see the finish in the harbor ahead. Down to the last few miles, their boat flipped over. Collective sigh of relief. We quickly shifted our crew to have the newer members get a chance at finishing the race. We crossed the finish line with 5 women and 1 guy in the boat. It was a great experience and was my favorite race of the season. We had a great crew to paddle with and I was grateful for the warmer water to play in.

And finally, our last race of the season, all the way across Monterey Bay. Starting on our home turf and ending where the season began. It was a great race across familiar water, dueling it out with our own crews and most of the NorCal teams. I got to paddle with some women who I raced multiple times with this season and some I had never raced with before. A great end to my very first season of outrigger racing.

So, what have I learned from my first year of paddling?

1) I love it. One-man, two-man or six-man paddling is a lot of fun. Conveniently, with broad, strong shoulders and long, powerful legs, I’m kinda built for it. Same as basketball, volleyball and swimming.

My crew for my first ever outrigger canoe race in Monterey. Check out those blue first place medals!

2) These people are awesome. My coaches took a newbie and turned me into an fairly decent paddler in just under a year. I’ve been doing this less than a year! I have fun with my team out of the boat as well as in it. They are a great group of people and now great friends!

My first race with the “A” team around Alcatraz Island 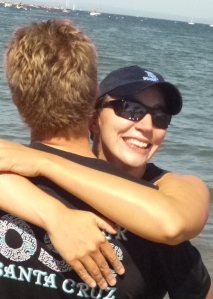 At the finish line of yesterday’s Monterey Bay Crossing

← How To Breathe Underwater
New Company Shirts Are In! →

1 Comments on “The End of Outrigger Season”

This site uses Akismet to reduce spam. Learn how your comment data is processed.